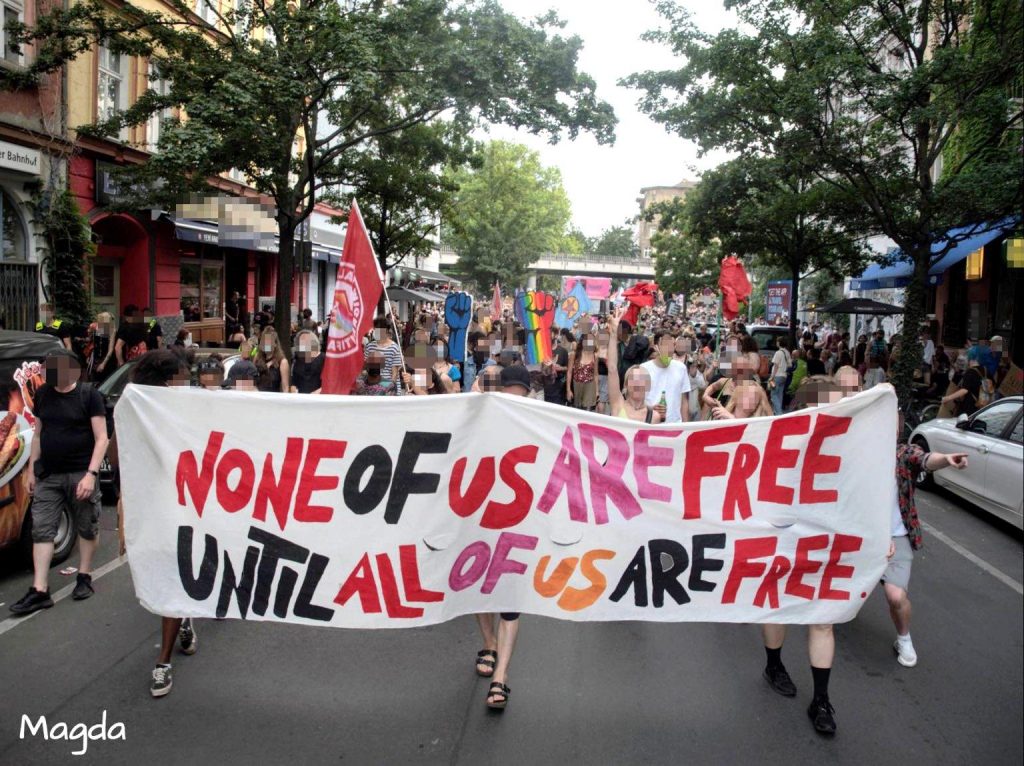 On Saturday 24 July 2021, over 10,000 people took to the streets for Berlin’s first Internationalist, anti-racist, anti-colonial, anti-capitalist Pride march. Held on the same day as the mainstream Christopher Street Day parade, the march was the most representative queer Pride demonstration ever to take place in the city, bringing together diverse queer communities under the banner “none of us are free, until all of us are free”. More than 450 viewers joined the simultaneous livestream. 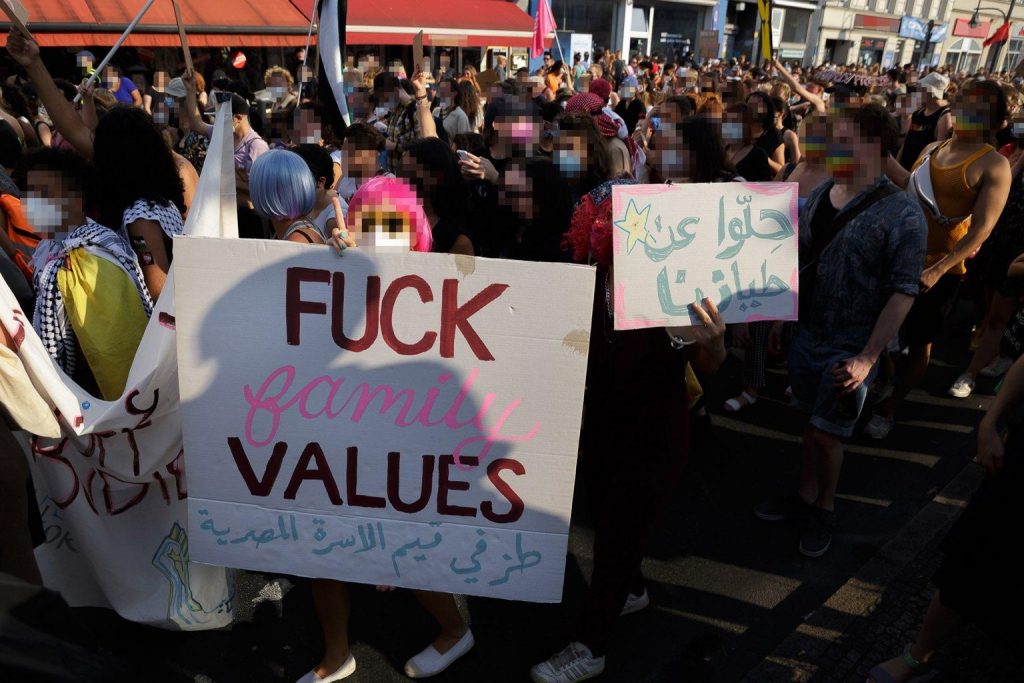 Organised by a coalition including QuARC, Bloque Latinoamericano, Migrantifa Berlin, Jewish Bund, Palestine Speaks, Constellation of Liberation, Berlin Migrant Strikers, BDS Berlin, and Berlin Against Pinkwashing, the demonstration created a space for everyone in Berlin who is not represented by either the commercial CSD, or the white-centric activist networks. 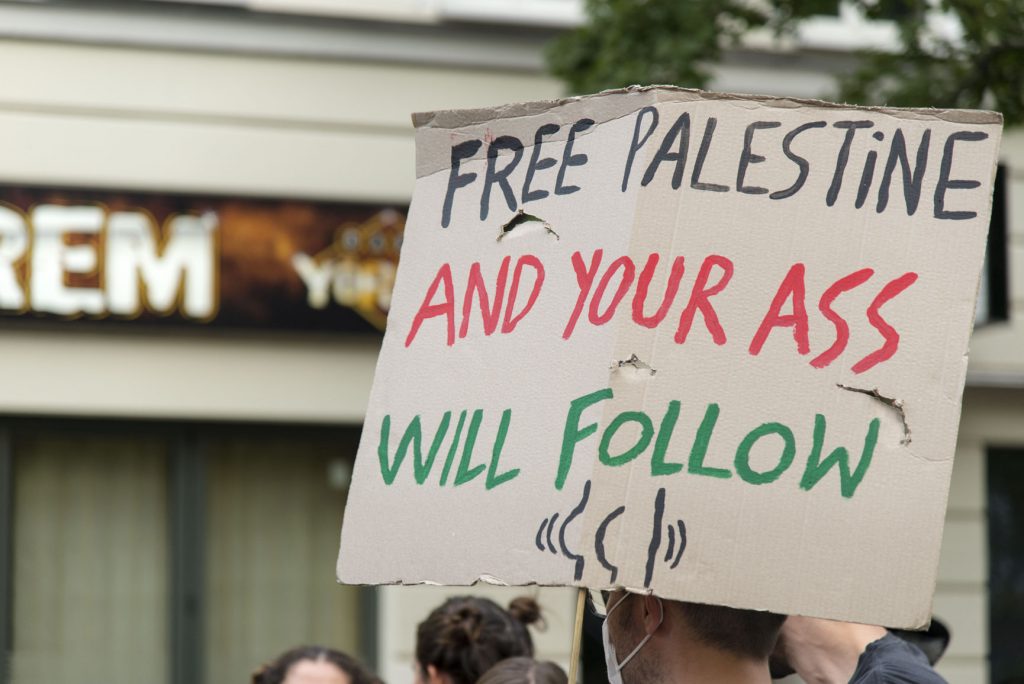 Marchers carried giant fists, papier mâché roses, and signs reading “Sisters and brothers of Poland and Hungary you are not alone”, “Jewish Queers for a Free Palestine”, and “Free Egypt’s Tiktok Women!” 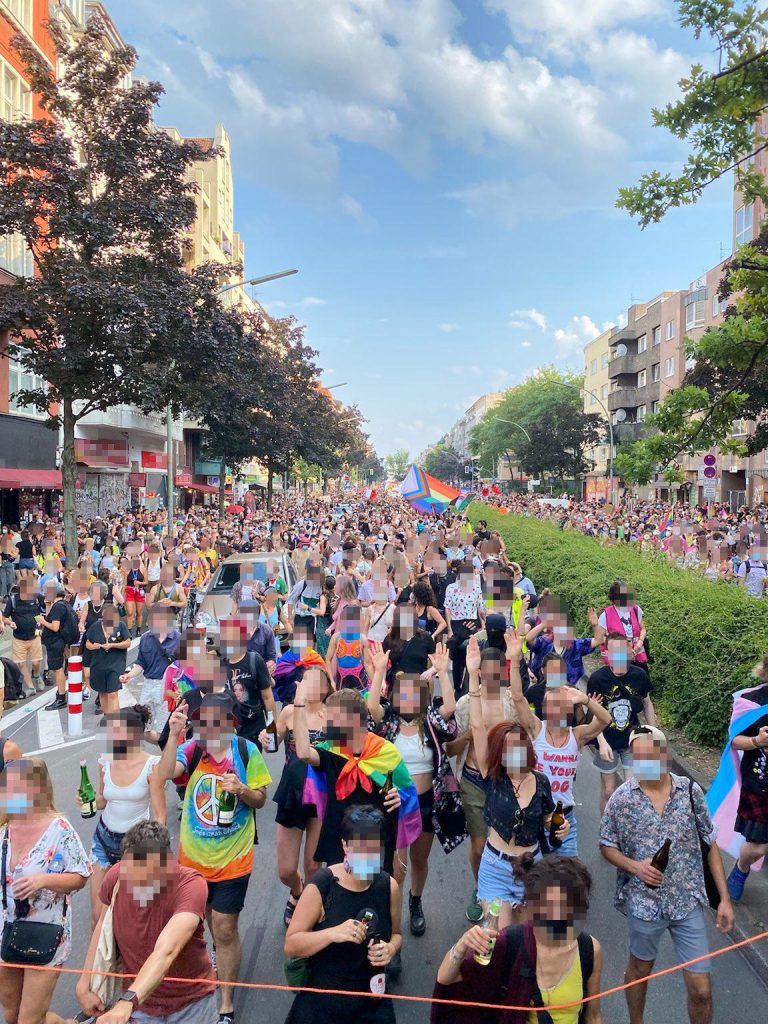 The demo was made up of many self-organized blocks, including queers with disabilities, an anti-Bolsonaro block, queer Palestinians, the Jewish Bund, Kurdish queers, Syrian revolution queers, and an Abya Yala – Sudaka – Latino block. Powerful speeches were given by Migrantifa, queer Palestinian activists, the Jewish Bund, MAD and Disability Pride, DW Enteignen, International Women* Space, Bloque Latino Americano, and the queer Polish activists of Constellation of Liberation. 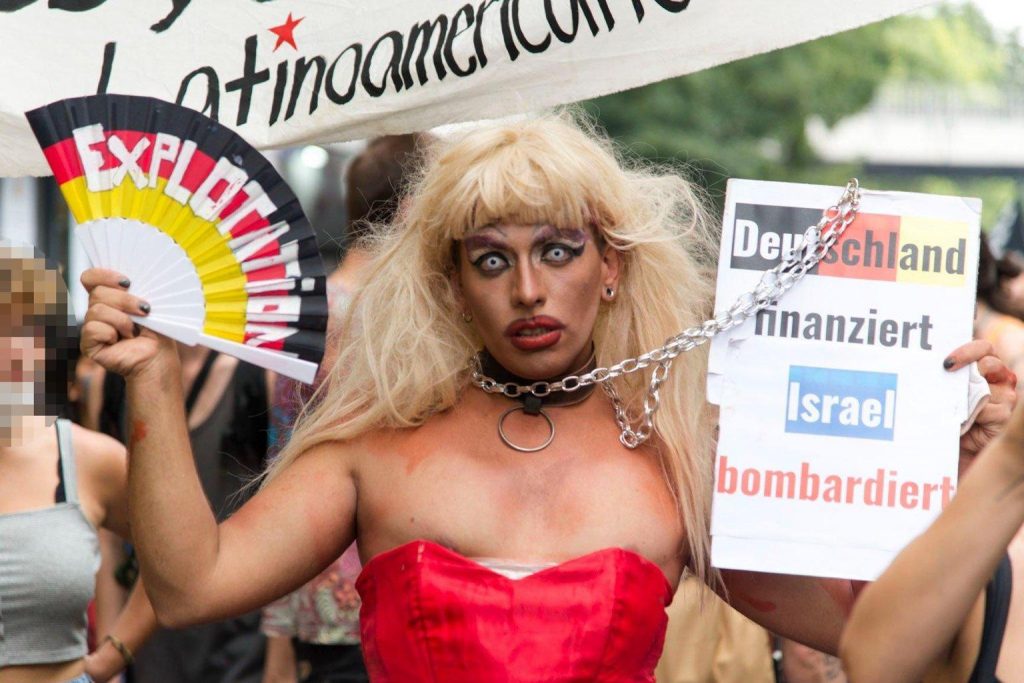 “All refugees are denied the right to choose where they want to stay, but it even gets worse with LGBTQI+ refugees who face danger and discrimination in everyday life. We demand the right to safe housing, not isolated from LGBTQI+ communities and wider society! We demand the right to choose where we live. We demand for Germany to take charge like it did in 1884 while partitioning the African continent, to do the same now and serve a formal apology to countries affected by colonialism, followed by the return of antiques and artefacts back to where they belong, the motherland. Reparations are not up for discussion; they are way overdue. And we should dictate the terms. We demand an expanded curriculum in schools, teaching extensively about Germany’s colonial past, racism, and a more diversified education covering gender and sexuality.” – Marlize, Kenyan trans activist. 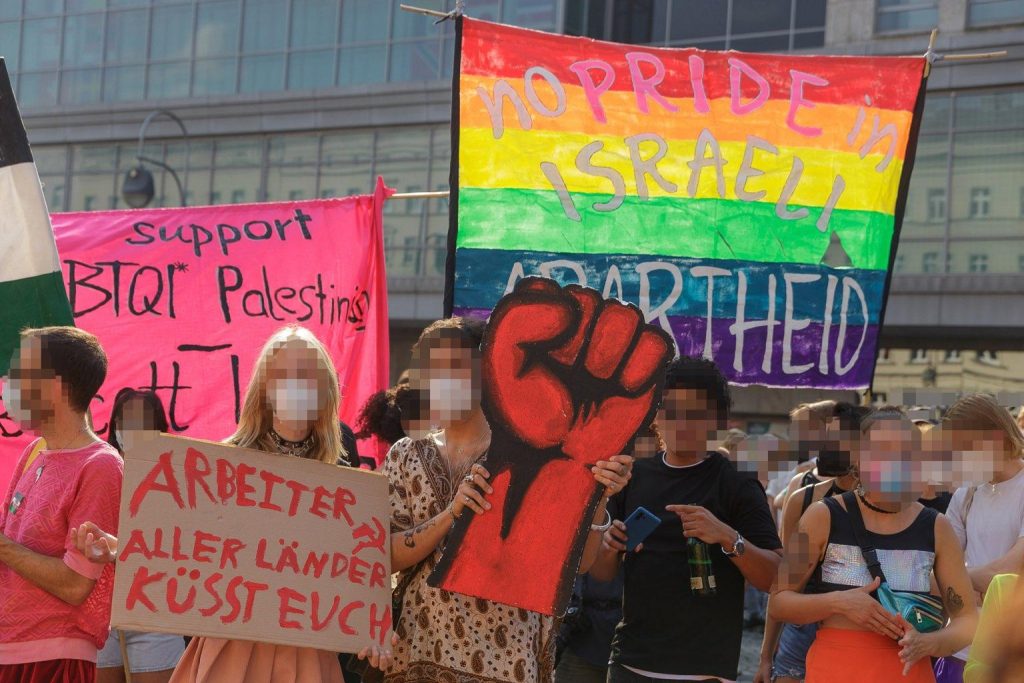 “The Israeli state spies on us and uses our sexuality and gender identity to blackmail and threaten us, in an attempt to weaponise society’s homophobia against us. All the while, it projects a virtuous image of its respect for gay rights. But there is no pride in occupation. There is no pride and no safety under colonisation, no pride in apartheid. We refuse to be used as a tool for the Israeli occupation to pinkwash its image before the world. Our freedom as queers is inseparable from our freedom as Palestinians.” – a queer Palestinian activist. 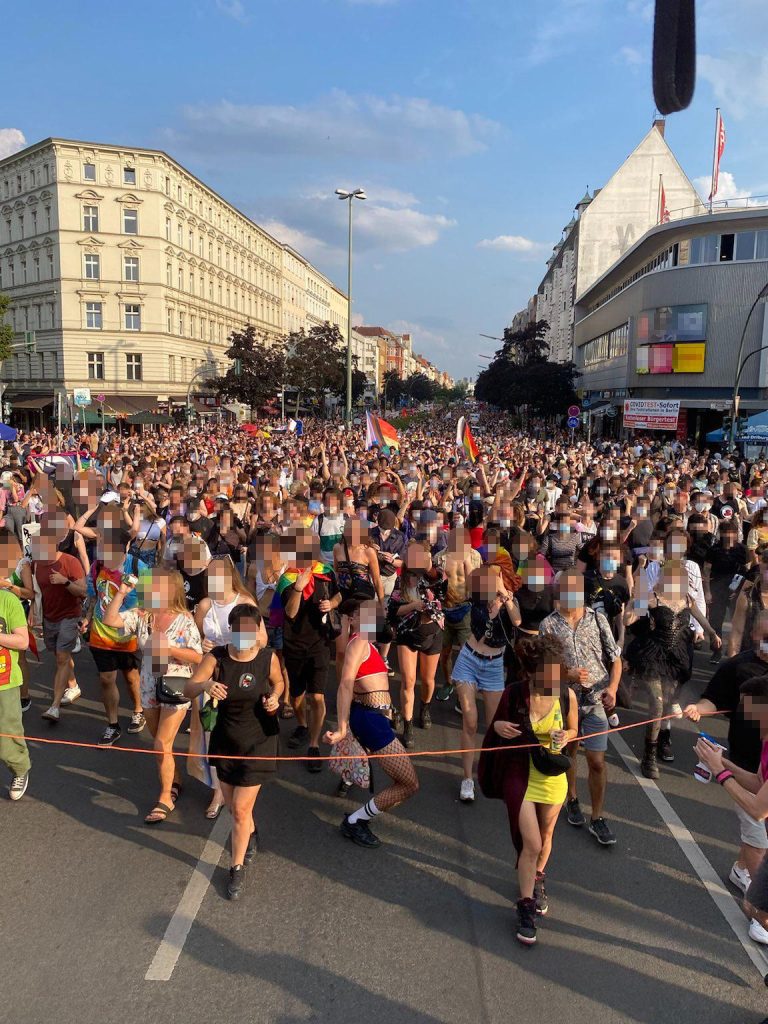 “All and any fights against fascism, imperialism, and fundamentalism, against capitalism, are all part of our same internationalist fight for liberation. This is why we are here today. To use one of the main slogans from the Polish protests – you will never walk alone!” – an activist from Constellation of Liberation. 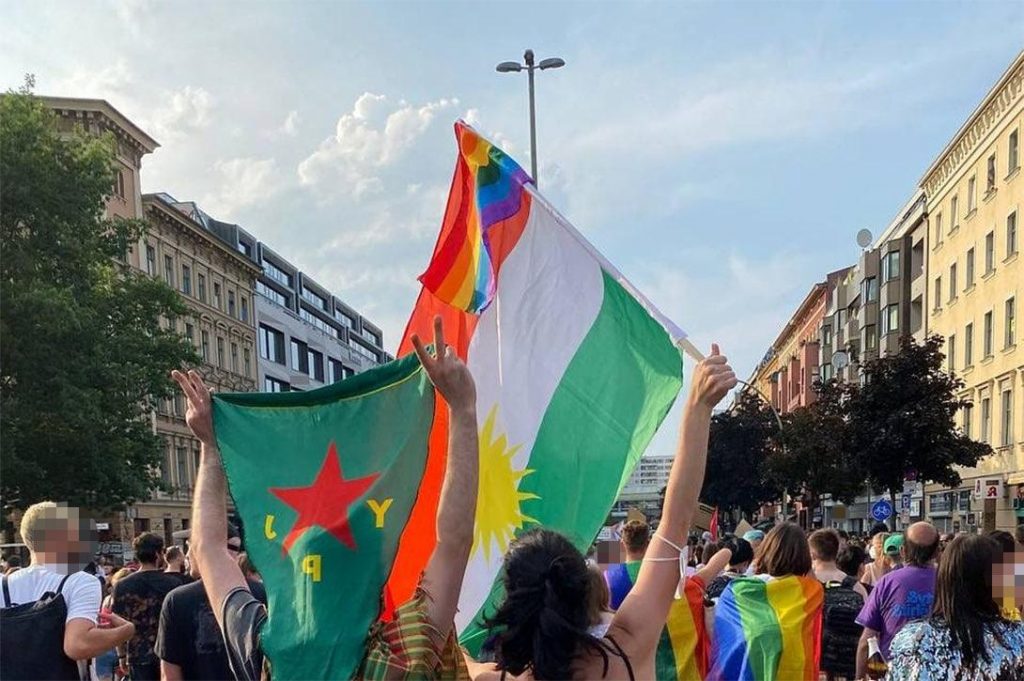 “Just like queer liberation, Jews and antisemitism are often instrumentalized to justify racism against Palestinians, against Muslims and Arabs. We refuse this role! Queer spaces must be defended against gentrification and must be liberated from nationalism, Zionism, and all forms of white supremacy.”- an activist from Jewish Bund.

During the demonstration, some right-wing “journalists” began to take close-up photos of participants. When organisers demanded the photographers respect the marchers’ privacy, the journalists claimed they had suffered attacks on their press freedom. Asking journalists to refrain from taking portrait photos without consent does not impinge on press freedom. Despite this harassment and police violence during the demonstration, the Pride march continued to the end of the planned route. Two people were arrested during the march; both were released within an hour and are being supported by the demonstration organisers. 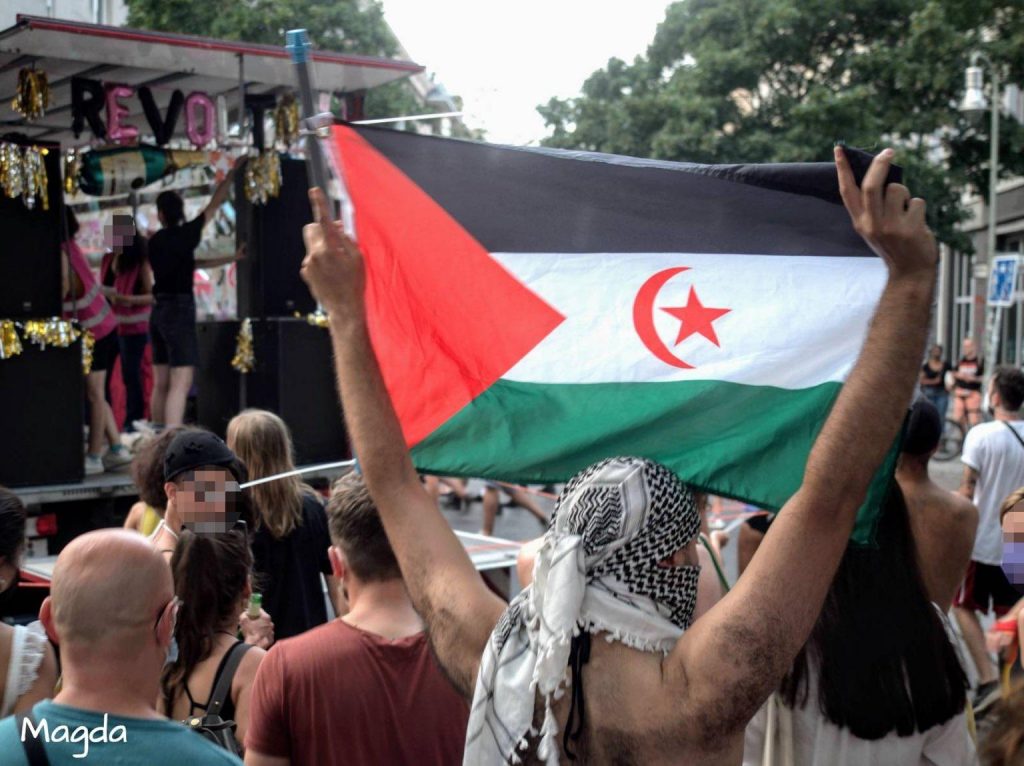 The march organisers stand rooted in their convictions, in their commitment to the struggle for a Free Palestine, and in solidarity with all oppressed peoples. As a broad and diverse group with members and supporters from many different backgrounds and identities, QuARC’s politics are both radical and soft, guided by revolutionary love and rooted in principles of justice, equality, care, and liberation. 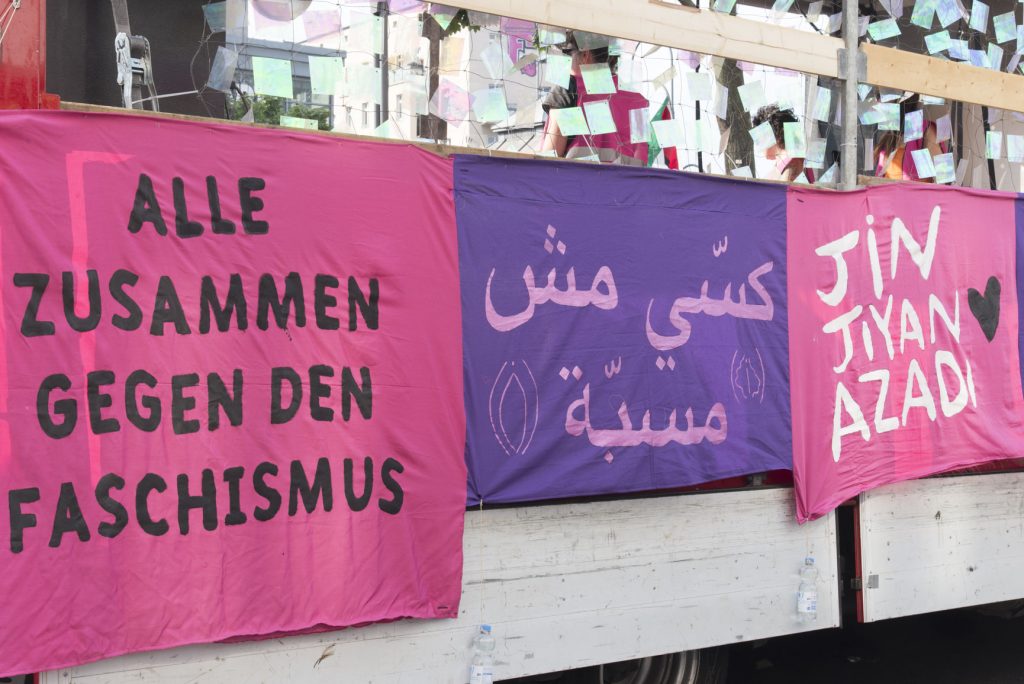 The Internationalist Pride showed that while our struggles might differ, we are many, and together we can be a powerful force against the status quo. In the words of Marsha P. Johnson, one of the mothers of the trans and queer liberation movement, there is “no Pride for some of us, without liberation for all of us”.